After more than 10 years of planning, strategy, and vision, the Nottawaseppi Huron Band of the Potawatomi opened the doors to FireKeepers Casino in August of 2009. 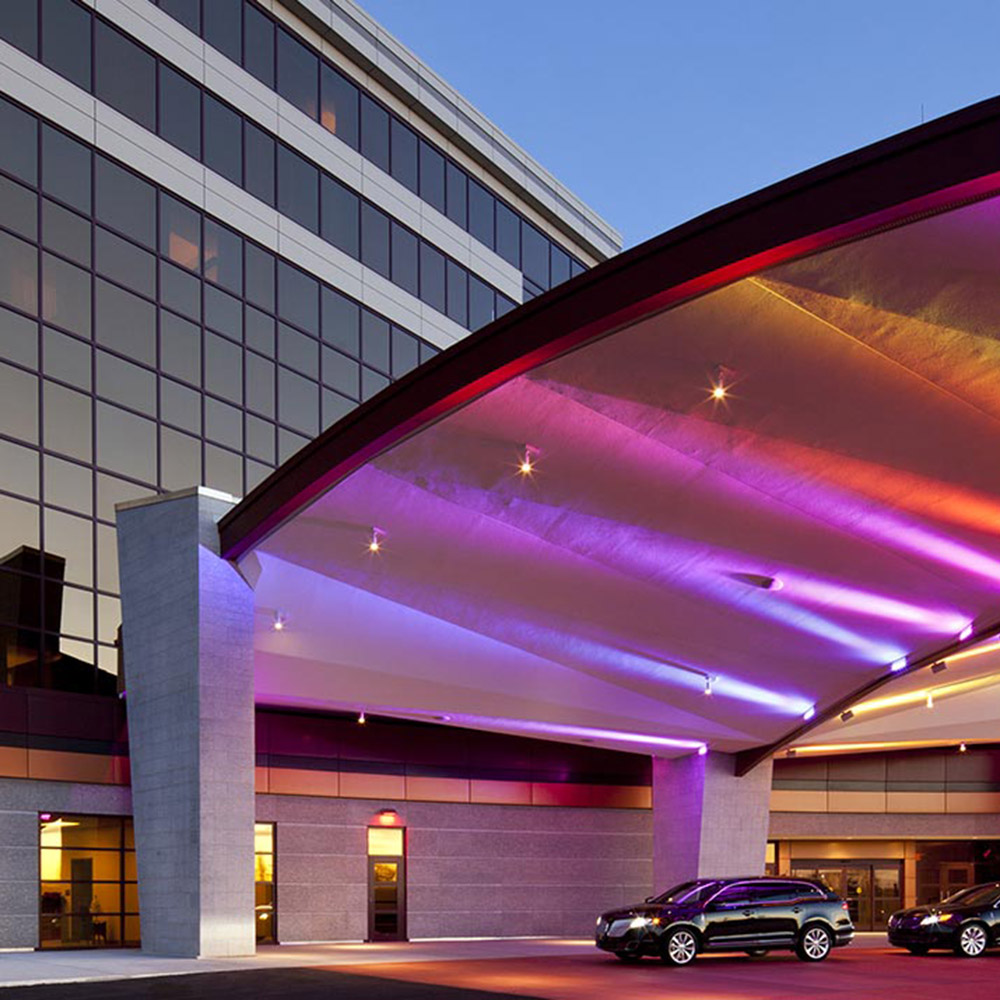 The property features a 111,700-square foot gaming floor with 2,900 slot machines, 70 table games, multiple restaurants and lounges, a live poker room and bingo room. This $300 million project created a unique gaming destination in the mid-west all while initially creating 1,500 jobs for the local community. FireKeepers Casino Hotel is located just off Interstate 94, at Exit 104, in Battle Creek, Michigan and is a favorite gaming destination for residents in central and southern Michigan, northern Indiana and western Ohio.

Less than two years later, on March 1, 2011, FireKeepers Casino broke ground on a major expansion. This initiative included an 8-story resort-style hotel and expanded Bingo room. During this construction phase, the tribe’s commitment to local spending resulted in awarding contracts that total more than $25 million to the State of Michigan.

FireKeepers hotel expansion opened its doors to the public on December 12, 2012. The expansion showcased a 243-room resort-style hotel complete with indoor pool, exercise facility, a full-service restaurant named Smoke ‘n Fire, and business center. The addition also features a functional multi-purpose Event Center that is capable of seating up to 2,000 guests as a concert venue. When not in use as a concert venue for superstar performers such as Tony Bennett, Reba McIntyre, and Tim Allen, the versatile space can accommodate banquets, corporate meetings, trade shows, and other events. This expansion brought 300 additional jobs to the Battle Creek area.

FireKeepers’ Hotel, in just over two years of operation, was named a Four Diamond Hotel by AAA, one of the hospitality industry’s premier honors. The 243-room hotel, featuring 26 suites, earns an achievement that ranks FireKeepers as a premier establishment esteemed by AAA’s professional inspectors. The Four Diamond recognition is given to just five percent of the more than 28,000 approved by AAA properties rated each year. FireKeepers has continued to receive this designation annually.

Also in April 2016, FireKeepers announced another expansion to the property, which would introduce a convenience store and gas station located adjacent to the casino. The convenience store and gas station, named “FireKeepers Pit Stop”, features a car wash, a convenience store with various food and beverage items, as well as a place to fill up your gas tank while visiting FireKeepers. The Pit Stop opened November 1, 2016.
Dacey’s Taphouse opened in December 2016. A new restaurant and bar concept that focuses on Michigan’s craft beer industry as well as great food, the Taphouse features a rustic atmosphere, with contemporary features opens to the casino floor and comfortably seats 175. It is now home to FireKeepers Sportsbook, where guests can wager on events from the four major sports: football, basketball, hockey and baseball along with NASCAR, boxing, MMA, soccer, championship golf, championship tennis and more! The Sportsbook also offers futures wagering on upcoming championships in major sports.

2017 marked the opening of The Fire Hub, a unique, multi-million dollar casino community reinvestment project, with FireKeepers Casino directly purchasing, redeveloping and creating a restaurant concept, and adjacent food pantry to assist those less fortunate in the community, all housed in a restored historic city firehouse near Downtown Battle Creek. Eighty percent of profits are pooled to benefit local charities, while twenty percent provide maintenance capital dollars. Another major element of the project is the development of nearby tribal lands to farm and grow vegetables, with a goal of delivering a free salad bar to students in area communities. Michigan Gov. Rick Snyder joined the Nottawaseppi Huron Band of the Potawatomi Tribal Council, owners of FireKeepers Casino Hotel, along with a large contingent of elected officials and key Michigan business partners to commemorate the Grand Opening.

Kathy George was named CEO in May of 2017, after serving for five years as General Manager and Vice President of Hotel Operations. Her commitment to service is not exclusive to her work, she is also very active in the local community. She is very active in the community, serving on several boards, assisting with fundraisers, and has served as the Tournament Director for the FireKeepers Casino Hotel Championship, a stop on the Symetra Tour – Road to The LPGA.

FireKeepers executive staff and leaders of the NHBP announced in July 2018, their plans to construct an additional hotel tower. With more rooms and potentially more meeting space, FireKeepers will be able to market and attract guests from greater distances, bringing new visitors to the area and boosting the local economy. The company broke ground on the expansion on June 17, 2019. The Expansion opened August 16, 2021.
The new hotel tower adds 203 rooms and suites, plus a transformed hotel lobby area, a new location for FireKeepers’ signature restaurant Nibi, new high limit slot and table game areas and a new VIP lounge. The new hotel rooms feature upscale built-in décor along with the latest in guest service technology.

The welcoming 39,000 square foot first level delivers a vibrant new lobby bar and front desk while increasing the focus on the seven pillars which represent the Seven Grandfather Teachings of the Nottawaseppi Huron Band of the Potawatomi: Love, Respect, Bravery, Truth, Honesty, Humility, and Wisdom.

FireKeepers Casino Hotel took their gaming experience virtual adding the launch of FireKeepers iCasino and sportsbook website and mobile app in July 2021. With technology provided by Scientific Games (SG Digital), the platform includes the exciting slots and table games Michigan casino guests know and love, including 88 Fortunes, QuickHits, Monopoly, Blackjack, and Let it Ride. Plus, users can enjoy a wide array of wagering options on major sports, both American and international. The range of options includes football, basketball, hockey and baseball along with NASCAR, boxing, MMA, soccer, championship golf, championship tennis and more! Plus, futures wagering on upcoming championships in major sports. Rather than contract with an outside, national, brand known for iGaming, FireKeepers is instead leaning on the nearly 12-year success of their own brand.

In March 2022, with the help of Moore Trosper Construction Co., and Fishbeck Architecture, FireKeepers Casino Hotel transformed guest-favorite restaurant Smoke ‘n Fire, from the moment guests arrive at Smoke ‘n Fire, the mood of the dining room is set with smoky black and fiery red hues from the ground up, beginning with custom designed carpet. The lighting takes the eye up with crimson and orange; the treatments in the room continue the wood and smoke theme. With all of the design details culminating in a contemporary, high-end dining experience.

LOCAL AND STATE REVENUE SHARING BOARD

March 2022 — The Nottawaseppi Huron Band of the Potawatomi (NHBP), owners of FireKeepers Casino Hotel in Battle Creek, today announced that combined lifetime revenue sharing payments to the State of Michigan and the Local Revenue Sharing Board have exceeded $260 million! The continued operating excellence of the property led to its new annual contribution record, with combined payments of over $27.4 million to the State of Michigan and the FireKeepers Local Revenue Sharing Board (FLRSB).

Payments have increased every year except one time versus the prior year since the doors opened in August 2009. The payment to the State of Michigan totals more than $21 million, an increase of 11.4% over the 2019 payment, while the payment to the FLRSB of over $6.3 million is 30% higher than one year ago and 9.2% better than 2019. This brings the total monies NHBP has contributed to the State of Michigan to over $194.5 million and $66.1 million to the FLRSB and creates a combined lifetime contribution which totals $260,672,586!

Located in the historic Fire Station No. 4, on the corner Kendall Street and Dickman Road in Battle Creek.The menu features upscale, yet affordable, items with a delicious selection of freshly made bread and muffins, breakfast items, soups, salads, hot and cold sandwiches, an array of pizzas and, of course, scrumptious desserts.

The Fire Hub’s most important goal is to give back to the community and this will be accomplished via multiple programs. First, The Kendall Street Pantry, located in the rear section of the building, will work in conjunction with the Food Bank of South Central Michigan, distributing food from shelves to those less fortunate. Secondly, a large greenhouse on nearby tribal land will be utilized to grow food, with the goal of providing a free salad bar for downtown schools in Battle Creek. The third element is the creation of a fund to support local charities, with eighty percent of all restaurant profits providing the monies. The remaining twenty percent of profits will be reinvested in the property.

FireKeepers Casino Hotel donates all proceeds earned from the event to local charities, including the Haven of Rest and the South Michigan Food Bank.

Every year FireKeepers Casino Hotel participates in an array of local initiatives to benefit a variety of organizations within the community. These include blood, food, toy and coat drives, etc. FireKeepers has participated in multiple food drives every year since opening. Collecting thousands of pounds of food and items for a variety of organizations.

For the twelfth consecutive year, FireKeepers Casino Hotel has generously provided turkeys to five area food banks prior to the start of the holiday season; in 2018, the company raised the bar by providing an additional 1,500 turkeys for the Battle Creek area, bringing the total number of turkeys donated to 2,500. Since opening, FireKeepers Casino Hotel has made it a point to contribute to local area food banks, and many community organizations not only during the holiday season, but throughout the year. This also includes distributions to the FireKeepers Local Revenue Sharing Board (FLRSB), distributions to the state of Michigan, as well as focusing business operations on local spending. The Food Bank of South Central Michigan, located in Battle Creek, Mich. received 1,200 turkeys to assist our local community in an impactful way. Four regional locations have been selected for a donation of 200 turkeys each:

Since its opening in 2012, the Hotel has donated thousands of hotel rooms to a variety of different organizations and local businesses in need. FireKeepers has also given hundreds of thousands in monetary donations and gifts-in-kind to local organizations. These organizations include lions clubs, community foundations, PTAs, and animal rescues.