(Battle Creek, Mich.) Dec. 19, 2022 — Frank Tecumseh, who has served as Vice President of Human Resources since 2014, has been named CEO of FireKeepers Casino Hotel, as announced by the Nottawaseppi Huron Band of the Potawatomi Tribal Council Chairperson, Jamie Stuck. 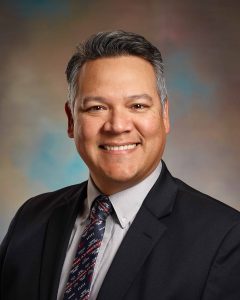 Tecumseh, a Member of the Prairie Band Potawatomi Nation, began his casino career at Prairie Band Casino Resort, spending a decade in Human Resources leadership before accepting the Vice President role at FireKeepers. With more than 20 years of Human Resources experience, he has a proven track record of executing strategic initiatives, building high performing teams and programs that have enhanced casino operations.

“Frank brings a wealth of knowledge and leadership with him to this position,” stated Chairperson Stuck. “He has been instrumental in FireKeepers recent achievements and we are confident that with his communication and leadership skills, the team will build upon those successes ensuring that FireKeepers remains the casino, hotel and employer of choice.”

Tecumseh is actively serving as the Board President for the Prairie Band Potawatomi Entertainment Corporation, he also serves on the Southwest Michigan Workforce Development Committee, and the American Gaming Association’s Responsible Gaming Committee.

“It is an honor to have been selected to serve as the leader of the FireKeepers Team and to continue to serve NHBP in this position,” stated Tecumseh. “I am incredibly excited for the opportunity to lead this talented team as we continue to innovate and transform within the ever-changing gaming industry.”

Tecumseh has a Bachelor’s Degree in Business Management from the University of Phoenix, and an MBA from Baker University.

FireKeepers Casino Hotel, located just off Interstate 94 at Exit 104 in Battle Creek, MI, has been named Best Casino by audiences in Western Michigan and Northern Indiana, plus earned multiple awards in the Casino Player Magazine Best of Gaming 2022 Native Midwest category, including Best Overall Gaming Resort. FireKeepers was recognized as 2019 Employer of the Year by Michigan Works! Association and was also selected as one of the Best Casinos to Work For by Casino Player Magazine. FireKeepers' signature restaurant, Nibi, is a multiple recipient of the Wine Spectator Award of Excellence. The property features 2,900 slot machines, 70 table games, and a 22-table live poker room. FireKeepers offers an AAA-rated Four Diamond resort-style hotel with 446 rooms, a functional multi-purpose event center, six distinctive dining destinations, and multiple lounges. FireKeepers is the title sponsor of the FireKeepers Casino 400, a NASCAR Cup Series race at Michigan International Speedway, and a host of the FireKeepers Casino Hotel Championship, an EPSON Tour-Road to the LPGA golf event. For more information, visit www.firekeeperscasino.com.

FireKeepers Casino Hotel is owned and operated by the Nottawaseppi Huron Band of the Potawatomi.