(Battle Creek, MI) Feb. 14, 2020 – The winter weather advisory in effect for most of the state of Michigan didn’t keep Janet Hicks from visiting FireKeepers Casino Hotel by bus on the morning of Feb. 13.  The 13th proved to be lucky as, much to her surprise, Hicks was greeted at the door by FireKeepers CEO Kathy George while confetti flew and staff cheered.   For Hicks was recognized as the 1 millionth bus guest in the history of the casino.  Hicks was rewarded with $100 in Red Hot Credits, a $100 gift card and a complimentary overnight stay in FireKeepers Four Diamond Hotel. 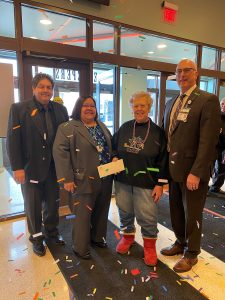 Hicks, from Livonia, informed the FireKeepers Team Members, who had gathered to celebrate the occasion, that she had been on many trips via bus (67 to be exact), but keeps coming back “because of the people”. She, along with her twin sister, is looking forward to another overnight trip and trying out FireKeepers signature restaurant, Nibi.

“We’re proud to celebrate this exciting milestone for our bus department” stated Kathy George. “We look forward to providing the best experiences to many, many more FireKeepers motorcoach guests in the future.”

Plan a bus trip for yourself by visiting firekeeperscasino.com/bus-programs.

FireKeepers Casino Hotel, located just off Interstate 94 at Exit 104 in Battle Creek, MI, has been named Best Casino by audiences in Western Michigan and Northern Indiana, plus earned multiple awards in the Casino Player Magazine Best of Gaming 2019 Native Midwest category, including Best Casino. FireKeepers was recognized as 2019 Employer of the Year by Michigan Works! Association and was also selected as one of the Best Casinos to Work For by Casino Player Magazine. FireKeepers' signature restaurant, Nibi, is a multiple recipient of the Wine Spectator Award of Excellence. The property features 2,900 slot machines, 70 table games, a live poker room, and bingo room. FireKeepers offers a AAA-rated Four Diamond resort-style hotel with 243 rooms, a functional multi-purpose event center, six distinctive dining destinations, and multiple lounges. Driven by high demand, construction on a second hotel tower is underway and expected to be complete in late 2020.  FireKeepers is the title sponsor of the FireKeepers Casino 400, a NASCAR Cup Series race at Michigan International Speedway, and host of the FireKeepers Casino Hotel Championship a Symetra Tour-Road to the LPGA golf event.

FireKeepers Casino Hotel is owned and operated by the Nottawaseppi Huron Band of the Potawatomi.