Construction on the hotel tower will provide an additional 203 hotel rooms, including fourteen suites, plus a transformed hotel lobby area, a new signature restaurant, new high limit slot and table game areas and a new VIP lounge.  The groundbreaking ceremony took place less than two months before the tribe celebrates the 10th Anniversary of the Grand Opening of FireKeepers Casino.

“We are proud to capitalize on our outstanding business performance in recent years and invest in a second hotel tower with many exciting complementary offerings.   This expansion represents our continuing efforts to build a solid foundation for the next seven generations of tribal members,” stated Jamie Stuck, Chairperson of the Nottawaseppi Huron Band of the Potawatomi. 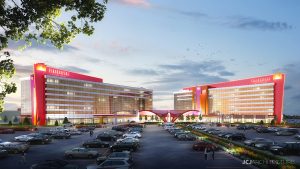 The new eight-story hotel will be designed in alignment with FireKeepers’ existing standards of excellence, as the current hotel has been designated a AAA Four Diamond award winner for the past five consecutive years.  The new hotel rooms will feature upscale built-in décor along with the latest in guest service technology.

The welcoming 39,000 square foot first level will deliver a vibrant new lobby bar and front desk while increasing the focus on seven main pillars which represent the Seven Grandfather Teachings of the Nottawaseppi Huron Band of the Potawatomi:  Love, Respect, Bravery, Truth, Honesty, Humility, and Wisdom.

FireKeepers signature restaurant, Nibi, one of Michigan’s finest dining experiences, will enjoy a new location with seating for approximately 125, and an interior that retains a focus on the tribal namesake, water, plus a new fire feature.  Nibi will also feature expanded wine storage and presentation, and a private dining area for up to 20, perfect for special parties or small business meetings. 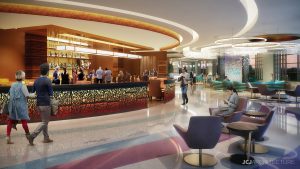 “Our focus from day one was to design a second hotel tower with the upscale, vibrant yet fun and friendly approach which has made our first tower such a big success,” stated Kathy George, CEO of FireKeepers Casino Hotel.   “This day marks a major step forward in our history and we look forward with excitement and anticipation for the new opportunities ahead of us.”

The construction project also redesigns a section of FireKeepers existing gaming space.   When complete, there will be new High Limit Gaming sections for slots and table games, plus a new bar and VIP lounge for select Red Hot Rewards Club members.

The scale of this project will provide an economic boost for many sectors of the construction community.  At the peak of construction, there will be roughly 250 skilled trades working on the site!  The current estimated completion date is Summer 2021. 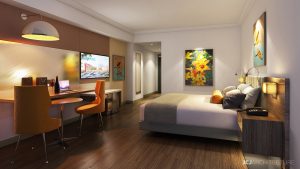 JCJ Architecture, an international leader in gaming and hospitality design, is an Employee Owned company that offers a full range of planning, architecture and interior design services to clients in both public and private sectors.  Well known throughout Michigan for more than 70 years, Clark Construction Company is a full-scale commercial construction firm with a reputation for quality. They have expanded into many market segments around the State of Michigan, and continue to be on the cutting edge of their industry. Due in part to their dedication to safety, community, and teamwork, Clark continues to grow as a leading provider in the field. Clark’s mission statement: We Build on a Foundation of Trust.